The slides from my presentation at MageTitans IT on the 5th of February in Milan are online on Slideshare.

Please don’t forget to rate the talk on joind.in! Thank you 🙂

I keep forgetting how to edit my desktop entries after updating PhpStorm on my Ubuntu installation.

This is the file that needs to be edited: ~/.local/share/applications/jetbrains-phpstorm.desktop

Just update the paths for the Icon & Exec after the update:

Girl power at #MageTitansIT: we give a warm welcome to @rescueann, our third confirmed speaker! https://t.co/n8ibcD0XIF

Every now and then someone on the Internet asks for a Magento database diagram, like this question here on MagentoSE.

While there are a lot of cool resources out there (which are unfortunately a bit outdated), I created a new one.

This is the database diagram of a fresh CE 1.9.2.2 installation.

How to read it & find stuff:

If you like it, go and upvote my answer on MagentoSE 😉

Have fun with it!

Feedback on the diagram is welcome. Especially on some lonely tables that I moved to the best of my knowledge and belief into one of the groups. 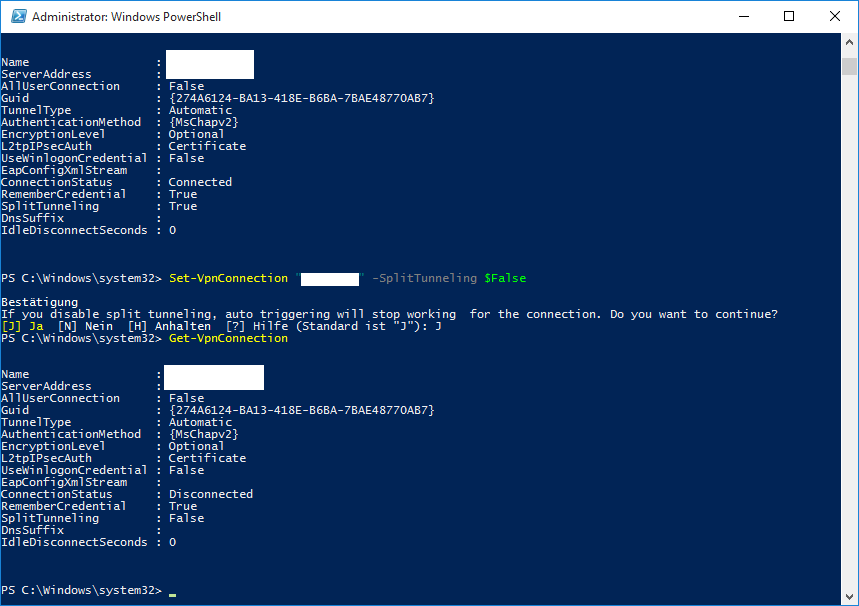 The network settings window of my VPN adapter was not accessible. Means: It was there, not greyed out but clicking on it did not open the settings tab.

The first place to get rid of my problem after the first recommendation: Adjust stettings in this file:

I was looking for some fast fix but: Nothing changed. Enabled/disabled the connection: not better.

Run the PowerShell as Admin:

Enabled/disabled the connection again, nothing happened.

Back to the config file

I tried to set the DnsAddresses in there:

(note: these are not the real DNS settings)

as well as setting it via command prompt:

After some more research I found out it could also be a DNS issue. I ran “nslookup” form the command prompt and checked the gateway.
This showed my local gateway.

Some hints on that from the Microsoft forum:

This seems to be IPv6 related.
It keeps using my ISP’s IPv6 DNS server instead of my company’s (IPv4 only) DNS server.
If I disable IPv6 on my LAN network adapter, it starts working.

Ok, it works, when SplitTunneling is disabled (Remote Gateway on) and IPv6 disabled.

I disabled SplitTunneling (again) and IPv6 on my WiFi and VPN. No luck.

Maybe these settings about help someone else resolving the issue. Some lucky users were able to resolve the problem after the very first step by editing the config file.

I was requested to create one little form for my father-in-law who runs a online radio in his free time. The feature is called “Wunschbox” so basically an input form were the listeners of the radio can leave their request for a certain song. The admins of the radio should be provided with the list of incoming requests and mark them as “done” (=played on the radio). Sure, not a problem.

Right after creating the project in PHPStorm I wondered if I should just continue in basic PHP or use a cool and fancy framework for this. I love working with frameworks and as I work with Magento as daily business – which provides a big toolset – I wondered if there was something out there that would please my requirements for this small project. It would have taken me about one hour to hack these two pages together but I decided to ask that question on twitter and got some replies. My little journey started.

TL;DR: I was looking for good ways to create a small web-app. After trying Silex and Lumen I decided to go back to basic PHP and finally to TDD.

Looking for the better

I started googling and one of the first frameworks that popped up was Silex which was also recommended in the first replies on twitter.

Silex is a PHP micro framework based on Symfony2 Components. I knew Silex a bit from digging into Bolt CMS some weeks ago. Also the first replies on twitter recommended Silex. So I added it via composer and got started. After adding the Symfony Form Component as a new dependency to my repository it had about 19M in size. That felt just wrong for my little small web-app and would have been an overkill. Meanwhile some new Tweets about Lumen (which I didn’t know before) arrived and I decided to have a look at it, as the website seemed pretty promising.

Lumen is a PHP micro-framework by Laravel. It can also be installed quite easily via composer. You can easily create new projects via command line by calling lumen new projectname. That’s what I did and I found myself again in a project folder with 20MB. The structure looked good but I didn’t want to continue at this point. Again: It was way too much and too big.

The better: Keep it simple – back to basic PHP

Silex and Lumen are really cool Frameworks (as far as I can tell from testing them both for about 30 Min.). But both of them felt just way too big for my two small PHP pages. At this point I reminded myself about some basic principles and one of them was: Keep it simple & stupid. In no way both of these two frameworks which had about 20M each were simple enough for my need as I expected my small web-app to have a few Kilobyte of Code. So I started with the frontend and created the first form in basic HTML. After that, I went to bed.

I tweeted my findings: “Conclusion after 1h of trying Silex and Lumen (which are awesome btw!): I should stick to my own principles and keep it simple > Basic PHP”.

I woke up in the moring with a reply from Vinai on twitter (thanks for that!) who recommended also basic PHP plus TDD!

I didn’t think of creating this “app” in a TDD way, but the size of the project was just perfect for REAL TDD! So I set up phpunit for my two pages and wrote the first test(s) this morning. At this time I have 6 tests, 2 classes (one for the application + one test class) and that basic HTML form from last night. Nothing big, I know. But I’m really happy with it.

Thanks for the inspiration, Vinai!

There’s some garden work waiting to be done today but I will continue in the evening.

I found the way of finding and deciding really interesting as well as the factors time and quality related to this.

“That’s cool, but you could have been done with that already”

Yeah, I know: I already spent way too much time with it. More than I would have initially needed. But I’m really happy with the current state, it’s pretty clean, straight, minimalistic and there were some interesting responses related to it.

Time to give Silex and Lumen a try and tweet about it: 1.25h
Setting up the project, phpunit and writing first tests: 0.75h
Time to write this little blogpost about it: ~0.25h
To be continued.

Time for some garden work now. Really. Looking forward to your thoughts & replies on that.